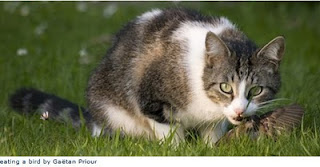 The Challenge
There is no question that birds are better off when cats stay indoors. Exact numbers are unknown, but scientists estimate that every year in the United States alone, cats kill hundreds of millions of birds, and more than a billion small mammals, including rabbits, squirrels, and chipmunks. Feline predators include both domestic cats that spend time outdoors and stray cats that live in the wild, sometimes as part of a colony.
Life for outdoor cats is risky. They can get hit by cars; attacked by dogs, other cats, coyotes or wildlife; contract fatal diseases, such as rabies, feline distemper, or feline immunodeficiency virus; get lost, stolen, or poisoned; or suffer during severe weather conditions. Outdoor cats lead considerably shorter lives on average than cats kept exclusively indoors.
Free-roaming and feral cats also pose a health hazard to humans from the spread of diseases such as rabies and toxoplasmosis. In April 2010, the Volusia County Health Department in Florida issued a rabies alert for 60 days following two unprovoked attacks on humans by feral cats within a month. Two cats had tested positive for rabies in the area. The CDC states that “Unvaccinated dogs, cats, and ferrets exposed to a rabid animal should be euthanized immediately.” Even in ‘managed’ colonies all cats cannot always be vaccinated, and infected animals may be even harder to catch in a timely manner before they infect other animals or humans.
Primary Birds Impacted
Solutions
Cat owners should keep their cats indoors. There are a number of ways that people can help their cats adjust to an indoor lifestyle, and ABC provides a wealth of resources to help them. Many veterinarians and animal welfare organizations support keeping cats indoors for their own safety, as well as to prevent them from killing wildlife. Outdoor cat colonies, sustained through the practice of Trap Neuter Release are also bad for birds, do not help reduce the overpopulation of feral cats, and are inhumane for the cats, who lead short, harsh lives. Instead, feral cats should be kept in enclosures, trapped and adopted to loving homes, or euthanized.
ABC Results
What Next?

Posted by suejenn at 2:43 AM No comments: