How changing the way we farm could reduce greenhouse gas emissions

Certain farming practices can trap a majority of greenhouse gas (GHG) emissions. On a global scale, this could even lead to a net decrease in atmospheric greenhouse gas levels — or, in other words, help reverse climate change. 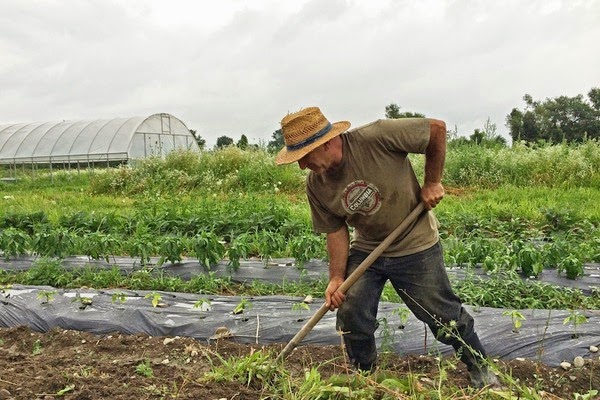 A recent study by the Rodale Institute documents how specific organic farming practices can trap a majority of greenhouse gas (GHG) emissions. On a global scale, this could even lead to a net decrease in atmospheric greenhouse gas levels — or, in other words, help reverse climate change.

The study, “Regenerative Organic Agriculture and Climate Change: A Down-to-Earth Solution to Global Warming,” highlights soil’s natural ability to trap carbon from the atmosphere. This process, called carbon sequestration, occurs when photosynthesis removes carbon from the air faster than other biological processes, like respiration, release it.

According to the Rodale, if half of the world’s croplands were shifted to regenerative methods, the world could reduce net annual greenhouse gas emissions from 51 gigatons of carbon dioxide equivalent to below 41– the threshold necessary by 2020 to limit global warming to 1.5º C.

The figures are based on 75 peer-reviewed studies and on test sites throughout the world where organic and conventional methods are compared side by side. These include Rodale’s long-running Farming Systems Trial (FST) in the United States and more recent Tropical Farming Systems Trial in Costa Rica. Rodale uses this data to calculate a rate of carbon sequestration per area of land cultivated, and then scale-up to see the impact of global adoption of each practice.

For example, if all current cropland were cultivated using methods tested in Iran and Egypt, 21 gigatons of carbon dioxide equivalent (GtCO₂e), or 40 percent of global emissions, could be sequestered annually. If applied to the world’s pasture and grassland, Rodale calculates its recommendations could sequester 37 GtCO₂e, or over 70 percent of emissions. Changing the cultivation of cropland, pasture, and grassland together could lead to a net reduction in the greenhouse gases in our atmosphere.

Rodale’s recommendations focus on soil health, biodiversity, and avoiding farming methods that contribute to a net release of carbon including the overuse and misuse of pesticides, artificial fertilizers, and unnecessary tilling. The regenerative techniques include crop rotation, cover crops, mulching and green manure, composting, and no-till practices.

Skylar Lindsay majors in Peace & Conflict Studies at Colgate University, where he heads the organic farming initiative and leads for the Outdoor Education program.

The Beauty of Pollination - Moving Art ™

The Beauty of Pollination - Moving Art ™
- a very short, but beautiful video presented as part of a TED Talk conference in 2011.


This video was shown at the TED conference in 2011, with scenes from "Wings of Life", a film about the threat to essential pollinators that produce over a third of the food we eat. The seductive love dance between flowers and pollinators sustains the fabric of life and is the mystical keystone event where the animal and plant worlds intersect that make the world go round.  Enjoy!!!

"Wings of Life" now streaming on Netflix!
Posted by suejenn at 4:07 AM 3 comments:

Little Things Matter: The Impact of Toxins on the Developing Brain


From the:
Canadian Environmental Health Atlas

We’ve been studying the impact of toxins on children for the past 30 years and reached the inescapable conclusion: little things matter. We’ve discovered that extremely low levels of toxins can impact brain development. We have also discovered that subtle shifts in the intellectual abilities of individual children have a big impact on the number of children in a population that are challenged or gifted. Steps should be taken to reduce children's exposure to toxins or suspected toxins.

Just another reason to embrace organic food and a chemical free environment.
https://www.youtube.com/watch?v=E6KoMAbz1Bw
Posted by suejenn at 3:02 AM 3 comments: