How The Taste Of Tomatoes Went Bad (And Kept On Going) 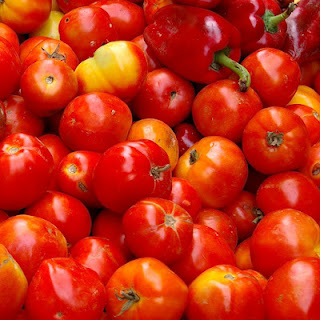 Notice how some of these tomatoes have unripe-looking tops? Those "green shoulders" are actually the keys to flavor. (Flickr.com)

Jun 28, 2012 (All Things Considered) — Scientists have discovered that the gene that makes tomatoes uniformly ripe and red also makes them less tasty. But it's going to take consumer education and a willingness to pay more before the industry makes a change.

The tomato is the vegetable (or fruit, if you must) that we love to hate. We know how good it can be and how bad it usually is. And everybody just wants to know: How did it get that way?

Today, scientists revealed a small but intriguing chapter in that story: a genetic mutation that seemed like a real improvement in the tomato's quality, but which actually undermined its taste.

Before we get to the mutation, though, let's start with the old tomatoes — the varieties that people grew a century or more ago.

Thanks to enthusiastic seed savers and heirloom tomato enthusiasts, you can still find many of them. Eric Rice, owner of Country Pleasures Farm near Middletown, Md., first encountered heirloom tomatoes when he was a graduate student in North Carolina.

"I decided I really liked them," he says. He liked the vivid taste and the unusual colors, from orange to purple. These tomatoes also have great names: Cherokee Purple, Dr. Wyche's, Mortgage Lifter.

Rice now grows these tomatoes to sell at a farmers market in Washington, D.C. But he admits that all that tomato personality can make heirlooms harder to grow and sell. "Heirloom tomatoes don't ship very well because they're softer. And frankly, they're all different shapes and sizes." This makes them more difficult to pack.

There's something else you'll notice as these tomatoes start to get ripe — something central to this story. The part of the tomato near the stem — what's called the shoulder of the fruit — stays green longer.

"I think it is an issue for the consumer," says Rice, "because people do buy with their eyes. And green shoulders also mean it's not entirely ripe or not as soft and tasty there."

Those green shoulders turn out to be more significant than you might think. In this week's issue of the journal Science, scientists report that when they disappeared from modern tomatoes, some of the tomato's taste went with them.

Here's how. Sometime before 1930, somewhere in America, a tomato grower noticed a plant that was producing distinctive fruit. These fruit turned red from stem to tip in a uniform way. They didn't have any of those bothersome green shoulders.

It was a new mutation, and plant breeders saw it as the next big thing.

They called it the "uniform ripening" trait. In 1930, the agricultural experiment station in Fargo, N.D., released a new tomato variety containing this mutation. The variety was called All Red.

Ann Powell, a researcher at the University of California, Davis, says it spread through the entire tomato industry. "It's a little hard to find a variety in modern production that doesn't have it," she says.

Powell is one of the scientists who now has discovered the genetic change responsible for "uniform ripening."

She was studying some genetically engineered tomato plants for another reason when she noticed that one of the added genes resulted in green tomatoes that were really dark green. It struck her as odd. "The leaves were not dark green. It was only the fruit that were dark green," she recalls.

Since this foreign gene had interesting effects on the ripening of fruit, Powell and her colleagues started looking for a similar gene that occurs naturally in tomatoes. They found it — and by coincidence, so did another research team on the other side of the country, at Cornell University.

The researchers discovered that this natural tomato gene, when it works properly, produces those green shoulders on tomatoes. The darker green color comes from the chlorophyll in plant structures called chloroplasts, which is what converts sunlight into sugars for the plant. In fact, those dark green shoulders were making those old tomatoes sweeter and creating more flavor.

The uniform-ripening mutation disabled this gene.

"We find out that, oh my goodness, this is one of the factors that led to the deterioration of flavor in the commercial tomato," says Harry Klee, a professor of horticulture at the University of Florida.

Klee has been exploring the chemistry and genetics of tomato taste. He says tomato breeders made a lot of compromises like this over the years as they created tomato plants that produce more fruit and are also rugged enough to hold up under rough handling.

Now, Klee says, with some of this new science, we have a chance to undo some of those decisions. "What I tell people is, we can have 100 percent of the flavor [of heirloom varieties] with 80 percent of the agricultural performance of the modern varieties, with very little work."

Breeders can start with some of the best heirlooms, then bring in some of the disease-resistance genes that modern varieties have. They should also be able to increase yields somewhat, he says.

But consumers may have to change their expectations, Klee says. "They're going to have to go in and say, 'That one's got that little discoloration at the top; that means it must be good!"

And, the only way they're likely to show up in your local grocery store is if consumers can recognize them and are willing to pay a bit more for them.

Still, for the best flavor, you might want to grow your own.

Source: NPR
http://www.northcountrypublicradio.org/news/npr/155917345/how-the-taste-of-tomatoes-went-bad-and-kept-on-going
Posted by suejenn at 8:59 PM No comments:

Arsenic in Our Chicken?


Let’s hope you’re not reading this column while munching on a chicken sandwich.

That’s because my topic today is a pair of new scientific studies suggesting that poultry on factory farms are routinely fed caffeine, active ingredients of Tylenol and Benadryl, banned antibiotics and even arsenic. 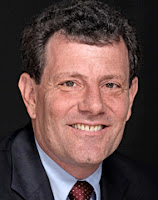 “We were kind of floored,” said Keeve E. Nachman, a co-author of both studies and a scientist at the Johns Hopkins University Center for a Livable Future.  “It’s unbelievable what we found.”

He said that the researchers had intended to test only for antibiotics. But assays for other chemicals and pharmaceuticals didn’t cost extra, so researchers asked for those results as well.

“We haven’t found anything that is an immediate health concern,” Nachman added. “But it makes me question how comfortable we are feeding a number of these things to animals that we’re eating. It bewilders me.”

Likewise, I grew up on a farm, and thought I knew what to expect in my food. But Benadryl? Arsenic? These studies don’t mean that you should dump the contents of your refrigerator, but they do raise serious questions about the food we eat and how we should shop.

It turns out that arsenic has routinely been fed to poultry (and sometimes hogs) because it reduces infections and makes flesh an appetizing shade of pink. There’s no evidence that such low levels of arsenic harm either chickens or the people eating them, but still...

Big Ag doesn’t advertise the chemicals it stuffs into animals, so the scientists conducting these studies figured out a clever way to detect them. Bird feathers, like human fingernails, accumulate chemicals and drugs that an animal is exposed to. So scientists from Johns Hopkins University and Arizona State University examined feather meal — a poultry byproduct made of feathers.

One study, just published in a peer-reviewed scientific journal, Environmental Science & Technology, found that feather meal routinely contained a banned class of antibiotics called fluoroquinolones. These antibiotics (such as Cipro), are illegal in poultry production because they can breed antibiotic-resistant “superbugs” that harm humans. Already, antibiotic-resistant infections kill more Americans annually than AIDS, according to the Infectious Diseases Society of America.

Researchers found that most feather-meal samples contained caffeine. It turns out that chickens are sometimes fed coffee pulp and green tea powder to keep them awake so that they can spend more time eating. (Is that why they need the Benadryl, to calm them down?)

The other peer-reviewed study, reported in a journal called Science of the Total Environment, found arsenic in every sample of feather meal tested. Almost 9 in 10 broiler chickens in the United States had been fed arsenic, according to a 2011 industry estimate.

These findings will surprise some poultry farmers because even they often don’t know what chemicals they feed their birds. Huge food companies require farmers to use a proprietary food mix, and the farmer typically doesn’t know exactly what is in it. I asked the United States Poultry and Egg Association for comment, but it said that it had not seen the studies and had nothing more to say.

What does all this mean for consumers? The study looked only at feathers, not meat, so we don’t know exactly what chemicals reach the plate, or at what levels. The uncertainties are enormous, but I asked Nachman about the food he buys for his own family. “I’ve been studying food-animal production for some time, and the more I study, the more I’m drawn to organic,” he said. “We buy organic.”

I’m the same. I used to be skeptical of organic, but the more reporting I do on our food supply, the more I want my own family eating organic — just to be safe.

To me, this underscores the pitfalls of industrial farming. When I was growing up on our hopelessly inefficient family farm, we didn’t routinely drug animals. If our chickens grew anxious, the reason was perhaps a fox — and we never tried to resolve the problem with Benadryl.

My take is that the business model of industrial agriculture has some stunning accomplishments, such as producing cheap food that saves us money at the grocery store. But we all may pay more in medical costs because of antibiotic-resistant infections.

Frankly, after reading these studies, I’m so depressed about what has happened to farming that I wonder: Could a Prozac-laced chicken nugget help?

Here is another heart-warming example of the growing food movement and a great story of people coming together and getting in touch with nature in the city.


This film tells the story of a South Los Angeles edible garden planted in a surprising spot. Ron Finley, its planter, constructed the garden the way he wishes his neighborhood could be. And his vision of repurposing unused open space, like that of many others working together on urban agriculture in our city, should inspire us all, and remind us of how, with a little creativity of vision, and willingness to get our hands dirty, we can remake spaces defined by asphalt and dead grass into productive places of beauty.

TO LEARN MORE about Teaching Gardens:
http://www.calendow.org/etemplate.aspx?id=5917&ItemID=5917
http://www.heart.org/teachinggardens
Posted by suejenn at 2:06 PM No comments: